Get the Monarco HAT board with a discount and help us test it with Raspberry Pi 4.

Why is testing needed?

The youngest member of the Raspberry Pi family, the Raspberry Pi 4 minicomputer, has been on the market since June 2019. It brings a more powerful quad-core CPU, two HDMI ports for dual display solutions, Gigabit Ethernet, USB 3.0 and bigger RAM (up to 4GB).

Alongside these changes the connectors have been moved to new locations, resulting in the need of a new enclosure for the Monarco HAT and Raspberry Pi 4. 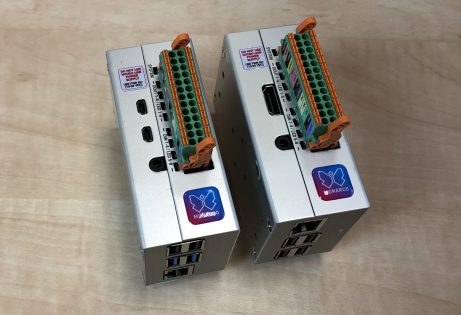 From the perspective of the Monarco HAT, the most important news is the increased heat generated by the new and more powerful CPU, which is our main concern and the primary reason for extensive testing.

Our internal testing shows that the Raspberry Pi 4 works well with the Monarco HAT in applications and projects for which the Monarco HAT was designed for, i.e. data acquisition (DAQ), data logging, monitoring of machines and processes, collecting data from legacy PLCs, (I)IoT gateway, etc.

Under light load (*), the CPU temperature settles around 66.5°C in Raspberry Pi 4, compared to 62.5°C in Raspberry Pi 3B+. In both models we use the latest Raspbian Desktop OS with no tweaks. As you can see in the image from thermal camera below, there are only slight differences also in the surface temperatures of the metal enclosures.

Standard and infrared photo of Monarco HAT in an enclosure with Raspberry Pi 3B+ (left), Raspberry Pi 4 (center) and again Raspbery Pi 3B+ (right). All are running the same algorithm (light load).

When a synthetic stress test is started, temperatures rapidly grow to 85°C where the CPU is throttled (CPU frequency is lowered to reduce power) to avoid further overheating and damage (see the time plot below). CPU throttling happens significantly sooner in RPi4 (32 seconds) compared to 220 seconds in RPi 3B+. It is important to keep in mind that the full CPU power induced by the stress test is about 4 times higher in the case of RPi4. Ambient temperature during the test was 25°C, the devices under testing were mounted in vertical position on a DIN-rail.

Playing a bit more with the RPi4 we observed it's no problem to overheat it while e.g. watching Full HD videos on YouTube, but that's hardly the case in typical projects in industrial automation.

A synthetic CPU stress test on a Raspberry Pi 4 and 3B+. Moderate load (left and right part) vs full load (middle part). Ambient temperature 25°C.
Temperatures in a synthetic test vs. real-world testing
Sure, the thermal management and heat dissipation in Raspberry Pi 4 deserves our attention. But how serious is the problem? Is it a blocker for using Raspberry Pi 4 in industrial automation? What behaviour and performance will we observe in real-world projects and applications? That's exactly where we need your help with the testing.

How exactly can you help us?

Willing to participate? Welcome on board!

Use your discount code before Wednesday, January 29th 2020, 12:00 Central European Time, and enjoy your 30 EUR discount.
Choose one of the options below. 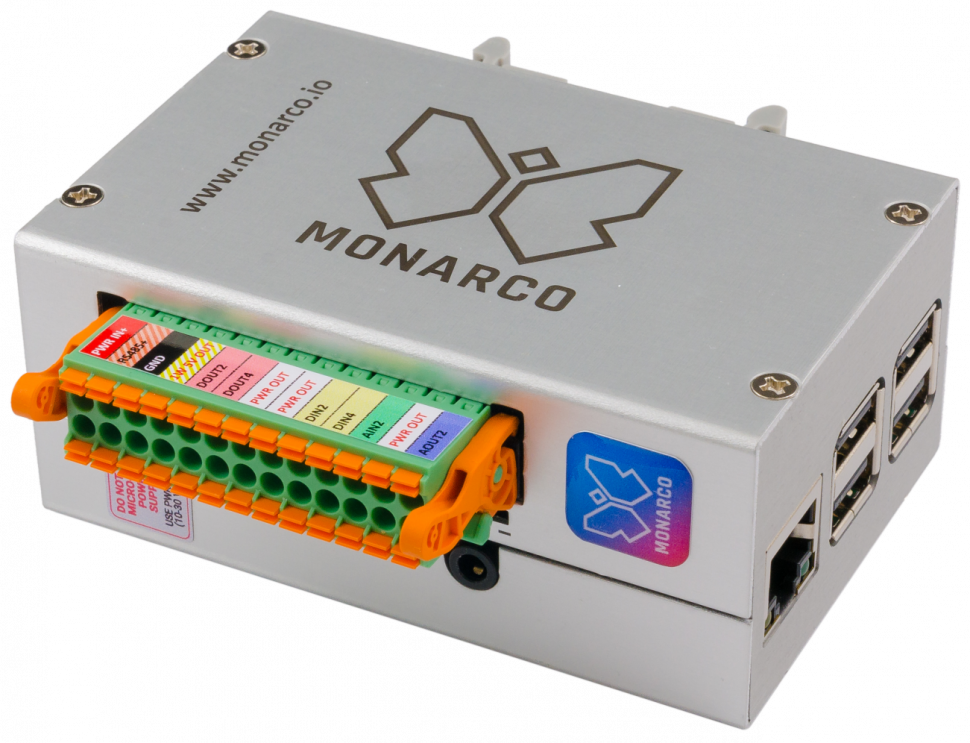 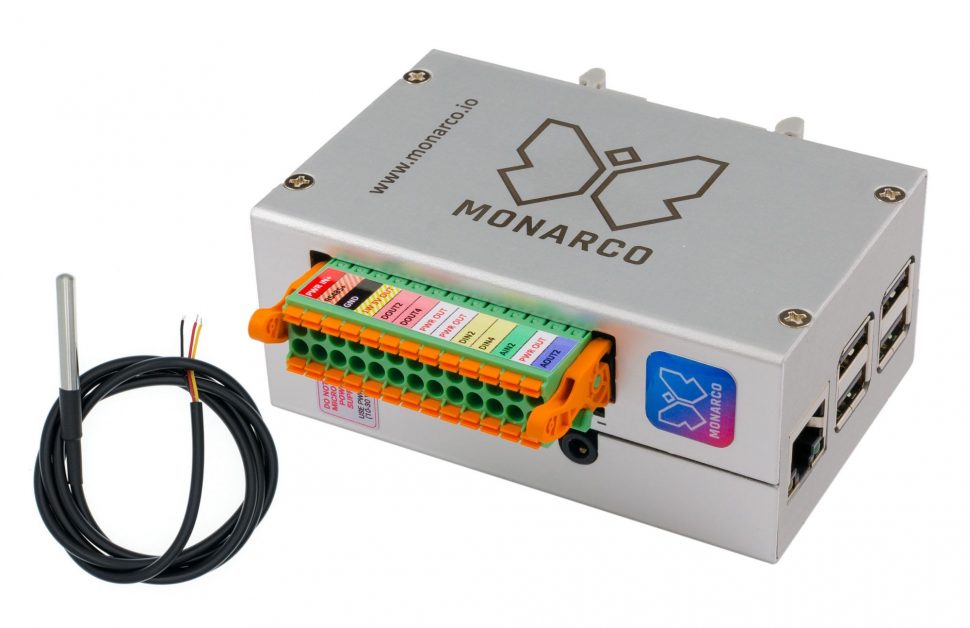 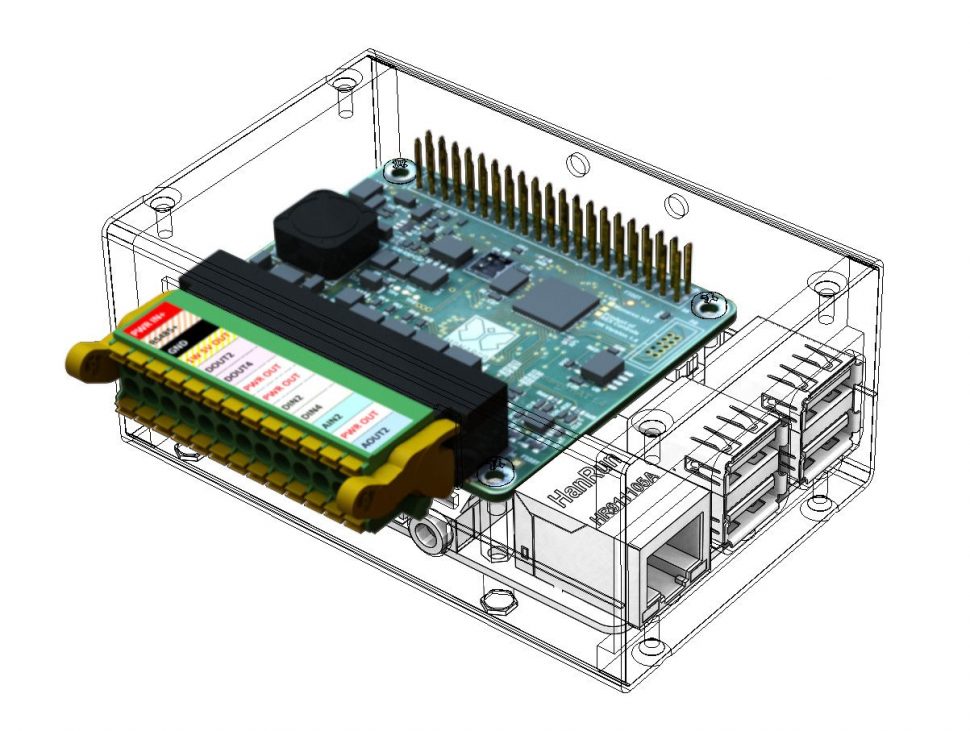 Help us test the Monarco HAT with Raspberry Pi 4 and get your rewards.

I've never used Monarco HAT. Is this for me?

Sure thing! Starting a new project with the most up-to-date hardware platform is always a good idea. Plus we'll reward you for doing so!

I'm already using Monarco HAT with Raspberry Pi 3B+ or older. Should I care?

The official announcement is that Raspberry Pi 3B+ will remain in production until at least January 2026. But you know that availability and lead times are always superior in the latest models of hardware, don't you?

Will I need some special hardware or equipment for testing?

Not at all. The main concern is the CPU temperature, which is measured internally. Though it's good to measure ambient temperature during your experiments, therefore an external temperature sensor might become handy. You can order one along with your testing kit.

Can I get only the Monarco HAT add-on board and the metal enclosure?

Sure you can. Just go for the "Barebone kit" in the order form.

Can I get the Monarco HAT without the metal enclosure?

Yes you can, just follow the link from homepage. In such a case you cannot use your discount code. At the moment we are focused on testing the Monarco HAT and Raspberry Pi 4 inside the metal enclosure.

Are you using some passive heat sink or a fan?

Not at all, we always use the plain Raspberry Pi and mount the Monarco HAT on top of it.

What Raspberry Pi models are supported?

At the moment we are focused on Raspberry Pi 4. In general, the Monarco HAT board works well with Raspberry Pi models B+, 2, 3, 3B+ and 4.

Can I use multiple HATs with a single Raspberry Pi?

No, HATs are not stackable by definition. A HAT has to have an EEPROM onboard that automatically configures it. This mechanism does not support stacking.

When will I receive my Monarco HAT?

We'll ship all the Monarco HATs in the first week of February 2020. Delivery time is about 3-5 business days within Europe and 10-12 days outside Europe.

Is there any new or updated HAT which is the subject of testing?

Nothing to worry about! As long as Raspberry Pi 3B+ or older models are on the market, we'll support them and have the metal enclosures in stock.

I'm already using Monarco HAT with Raspberry Pi 4. How can I help?

Thumbs up for being a step ahead! Get in touch, we'll love to hear about your experience and findings. We'll find a way to reward you as well ;-)
Yes, I want to participate in testing of the Monarco HAT